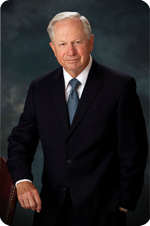 Mr. English currently serves as Chairman of the Board of Advisors for Heartland Consulting. Mr. English served 10 terms in the U.S. Congress representing Oklahoma’s 6th district. He served on the House Agriculture Committee and as chairman of the House Agriculture Subcommittee on Conservation, Credit, and Rural Development beginning in 1989. As chairman, Mr. English worked directly on legislation affecting rural development programs, including rural electrification and telecommunications, and pursued an aggressive agenda to revitalize the economy of America’s rural communities.
Mr. English also was a senior member of the Government Operations Committee and Chairman of the Subcommittee on Government Information, Justice, and Agriculture from 1981 to 1989. During that period, the subcommittee monitored the Rural Electrification Administration (REA) – now the Rural Utilities Service (RUS) – an agency of the U.S. Department of Agriculture.

Upon his departure from Congress in 1994, Mr. English became the fourth CEO of the National Rural Electric Cooperative Association (NRECA). NRECA is the national trade association for the Nation’s 900-plus locally owned, consumer-controlled, non-profit electric cooperatives, which currently deliver electricity to 42 million Americans in 47 states. As CEO of NRECA, Mr. English chaired Consumers United for Rail Equity (CURE), a national coalition representing captive shippers. He also served on Agricultural Energy Work Group’s “25 by 25″ Steering Committee, a group dedicated to increasing, by 2025, renewable energy resources that use agriculture and forestry products. In May 2010, Mr. English was inducted into the Cooperative Hall of Fame at the National Press Club in Washington, DC. Mr. English retired in March 2013 after serving as Chief Executive Officer of NRECA for 19 years.