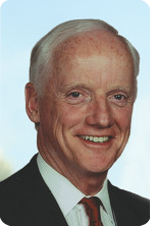 Frank Keating is president and CEO of the American Bankers Association. The ABA is a 135 year old association that represents banks of all sizes and charters and is the voice for the nation’s $13 trillion banking industry and its two million employees.

A native of Tulsa, Oklahoma, he received his undergraduate degree from Georgetown University and a law degree from the University of Oklahoma. His 30-year career in law enforcement and public service included stints as an FBI agent; U.S. Attorney and state prosecutor; and Oklahoma House and Senate member.

He served Presidents Ronald Reagan and George H.W. Bush in the Treasury, Justice, and Housing departments. His Justice and Treasury service gave him responsibility for all federal criminal prosecutions in the nation and oversight over agencies such as the Secret Service, U.S. Customs, the Bureau of Alcohol, Tobacco and Firearms, U.S. Marshals, the Bureau of Prisons, and the Immigration and Naturalization Service and all 94 U.S. Attorneys.

In 1993 Keating returned to Oklahoma to run for Governor. He was reelected in 1998, becoming only the second governor in Oklahoma history to serve two consecutive terms.

Keating recently served on the Bipartisan Policy Center’s Debt Reduction Task Force, a group of former cabinet members, elected officials and key stakeholders of both parties that recommended a series of tough measures to address the nation’s fiscal challenges. He is chairman of the Advisory Board of George Washington’s Mount Vernon and serves on the boards of the National Archives, the Jamestown Foundation and the Bipartisan Policy Center.