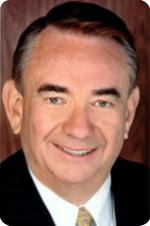 Before entering the private sector in 2005, Secretary Thompson enjoyed a long and distinguished career in public service. In 1966 he won a seat in Wisconsin’s state Assembly. He became assistant Assembly minority leader in 1973 and Assembly minority leader in 1981. Elected governor of Wisconsin in 1986, he was reelected in 1990, and in 1994 became the first governor in the state’s history to be elected to a third four-year term. In 1998 he was elected to a fourth term, and served in that position until his appointment as secretary of Health and Human Services in 2001.

As the head of the Department of Health and Human Services, Secretary Thompson served as the nation’s leading advocate for the health and welfare of all Americans. He worked to modernize and add prescription drug coverage to Medicare for the first time in the program’s history. A leading advocate of welfare reform, he also focused on expanding services to seniors, the disabled and low-income Americans. As governor of Wisconsin, Secretary Thompson was perhaps best known for his efforts to revitalize the Wisconsin economy, for his national leadership on welfare reform and for his work in expanding health care access across all segments of society.

A native of Elroy, Wisconsin, he received his undergraduate and law degrees from the University of Wisconsin-Madison.