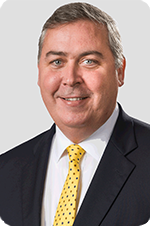 David Hickey is a partner in Kelley Drye & Warren LLP’s Washington, D.C. office and a member of the firm’s Government Contracts practice group.  He previously was a partner at Barnes & Thornburg LLP, a shareholder at Greenberg Traurig LLP and in-house counsel for General Dynamics Advanced Information Systems.

Prior to his private law firm practice, Mr. Hickey served as a staff investigator for the United States Senate Committee on governmental affairs and special investigations.  He also was a manager in the United States House of Representatives, Office of the Clerk, where he implemented congressional ethics responsibilities under the Lobbying Disclosure Act, Ethics in Government Act, Congressional Mailing Standards, House Gift and Travel Rules and the Federal Election Campaign Act.

Mr. Hickey is a graduate of the Virginia Military Institute and earned his juris doctor from the Catholic University of America, Columbus School of Law.